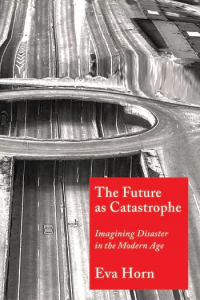 Why do we have the constant feeling that disaster is looming? Beyond the images of atomic apocalypse that have haunted us for decades, we are dazzled now by an array of possible catastrophe scenarios: climate change, financial crises, environmental disasters, technological meltdowns—perennial subjects of literature, film, popular culture, and political debate. Is this preoccupation with catastrophe questionable alarmism or complacent passivity? Or are there certain truths that can be revealed only in apocalypse?

In The Future as Catastrophe, Eva Horn offers a novel critique of the modern fascination with disaster, which she treats as a symptom of our relationship to the future. Analyzing the catastrophic imaginary from its cultural and historical roots in Romanticism and the figure of the Last Man, through the narratives of climatic cataclysm and the Cold War’s apocalyptic sublime, to the contemporary popularity of disaster fiction and end-of-the-world blockbusters, Horn argues that apocalypse always haunts the modern idea of a future that can be anticipated and planned. Considering works by Lord Byron, J. G. Ballard, and Cormac McCarthy and films such as 12 Monkeys and Minority Report alongside scientific scenarios and political metaphors, she analyzes catastrophic thought experiments and the question of survival, the choices legitimized by imagined states of exception, and the contradictions inherent in preventative measures taken in the name of technical safety or political security. What makes today’s obsession different from previous epochs’ is the sense of a “catastrophe without event,” a stealthily creeping process of disintegration. Ultimately, Horn argues, imagined catastrophes offer us intellectual tools that can render a future shadowed with apocalyptic possibilities affectively, epistemologically, and politically accessible.

The end of the world and the extinction of the human species will be a catastrophe without event, survivor, or witness. Eva Horn’s brilliant and copiously informed historical study explores the potential of ‚future fictions‘ as epistemic tools to anticipate the unknowable—to imagine it by giving it shape, investing it with meaning and affect and thereby making it ‚real.‘
Aleida Assmann, author of Cultural Memory and Western Civilization: Functions, Media, Archives

Who would ever have imagined that a book about catastrophes could be informative, entertaining, and helpful? In this magnificent volume, Eva Horn has achieved this trifecta. As a bonus, the book is erudite and paints a picture of thinking about disaster as a strident criticism of modernity’s blind faith in human progress. Read it!
John Casti, author of X-Events: Complexity Overload and the Collapse of Everything

‚Why do we imagine ourselves as Last Men​?‘ Eva Horn’s imaginative, incisive, and wide-ranging exploration of this arresting question doubles up an arresting genealogy of the modern fear of the future as catastrophe. An illuminating read, not only for students of modernity but also those pondering the looming crisis of climate change.
Dipesh Chakrabarty, author of The Calling of History: Sir Jadunath Sarkar and His Empire of Truth

Tacking between the fictional and the real, Horn provides the most comprehensive analysis to date of why we are such avid consumers of dystopian disasters and what these not-so-artificial scenarios mean for our ability to contend with these portentous events. The Future as Catastrophe examines the content, sources, history, and function that the catastrophic has for politics, knowledge, and the human capacity to imagine its own destruction.
Anson Rabinbach, author of In the Shadow of Catastrophe: German Intellectuals Between Apocalypse and Enlightenment

With the notion of the ‚Anthropocene,‘ we have learned to think, in an entirely secular and scientific way, the end times of human life on the planet. With breathtaking erudition and in stunning and precise prose, Eva Horn guides us through the ways in which the natural and social sciences, economic and political theory, and above all literature and popular culture, have, over the last two centuries, sought to rehearse scenarios of the end and its aftermath. As Horn also shows, the future perfect tense of catastrophe—all this will have been—serves as a remarkable diagnostic lens for the revelation—the ‚apocalypse’—of the present tense of catastrophic ways of living.
Eric L. Santner, author of The Royal Remains: The People’s Two Bodies and the Endgames of Sovereignty